It has been proved that the claim that the Frontiersmen were the first British in action at the start of WW1 was yet another myth. Now we need to solve a few more mysteries and put an end to other myths that have surrounded this understandably highly-regarded tale of high adventure. Why did the Frontiersmen travel to Belgium to serve? Why did they call themselves the “British Colonial Horse” with B.C.H. on their shoulders? Who was the mysterious Baron Jolly?

We still need to know more about Baron Jolly, who was the key to the Manchester Troop crossing the Channel. We now have his clear photograph, seen here in the photo of the men in bivouac, to the right of Capt. Nowell (wearing the peaked cap). That does not tell us much more and we are not helped by the fact that there were two, apparently unrelated, Baron Jollys in the Belgian Army. The Legion’s Baron Jolly enjoyed a long relationship with the Legion and later even presented the Baron Jolly Cup illustrated here. Unfortunately that cup is missing. In 1914 he was living in Singelbeek, a village in Belgium. Perhaps he was the Belgian equivalent of the local Squire? He was certainly a man of some influence.

In September 1914 Lt.Col. Driscoll asked the War Office to land him with 2,000 men in Belgium to cut the German lines of communication, which were by then quite extended. Driscoll asked that 500 of these men should be equipped and mounted and the rest would get everything they needed from the German convoys. It was very much an idea of a type of guerrilla warfare some years in advance of War Office thought. It was not completely far-fetched, as most Frontiersmen were experienced men from the South African War where they had learned a lot from the Boers about living off the land. Other Frontiersmen had served in various active capacities in far-flung countries of the world. The doubt is whether he could have raised 2,000, or even 1,000, as Frontiersmen were daily enlisting in all types of regiments. Driscoll was asked to parade his men in London where they were inspected by General Bethune, who was impressed and reported that these were “toughs” suited for irregular warfare. Driscoll waited, expecting a call that never came. The idea was not Driscoll’s, but had been put to him as early as August 2nd by Baron Jolly wiring from his home in Singelbeek, Belgium. He asked Driscoll if he could raise a regiment to serve with the Belgian Army. The next day a reply came offering just under 1,000 men plus Driscoll.. The offer was refused by the Belgian authorities, but Driscoll told Baron Jolly that he could easily have raised 2,000. Why did neither the Belgians nor the British initially want to use the Frontiersmen? Baron Jolly thought that it was because the Frontiersmen had such diverse skills, they could be better used according to their individual abilities. One of Nowell’s men, Balliol Lamb, said that he went with the Manchester Troop because he was convinced that the authorities had no intention of using the Frontiersmen and he was keen to get into action.

The next question is, why did the Manchester Troop go as the British Colonial Horse rather than as Frontiersmen? It has been suggested that this was to do with the Foreign Enlistment Act., however that only applies when British subjects wish to go and fight against a friendly country. Germany was definitely not a friendly country. Around 1908 some of the London Command considered having an adventure by going to Venezuela to take part in a revolution there. At that time the Legion had a number of members in many countries in South America. They were warned by the Legion Executive that they could be prosecuted under the Foreign Enlistment Act and the idea fell through, 1 The probable reason for the Manchester Troop going not as Frontiersmen was the strong disapproval of Driscoll and maybe his ordering Frontiersmen not to go as a unit. He was desperate to keep as many of his Frontiersmen as possible together waiting for that call from the War Office to form a Frontiersmen unit. He had many men working in the Remounts, mainly outside Southampton. Driscoll was constantly badgering the War Office and suggesting ideas of how the Frontiersmen, with their peculiar specialist skills, could be utilised in various scenes of the conflict. The call from the War Office was not to come until early 1915, but Driscoll did not then know that.

An interesting point is that, because of the Frontiersmen uniform of stetsons and breeches, the Belgians read B.C.H. as “British Canadian Horse” and always called them the Canadians. There were some Canadian links; Balliol Lamb had returned from British Columbia in the late spring of 1914. He decided to out to Belgium with Nowell because he was convinced that the British authorities had no intention of using the Frontiersmen. Frontiersmen were by nature of too independent a spirit and the War Office may have doubted that they would have taken Orders from the Generals without question. To some extent that view was correct as was shown when Driscoll did take the Frontiersmen to East Africa in 1915 as the 25th Bn. of the Royal Fusiliers and they were a constant thorn in the side of the Staff officers. If Frontiersmen were spread thinly around many regiments, that would obviate any potential disciplinary problems.

These are the names of the Manchester Troop. We have a group photograph, taken in London before they left for Belgium although, other than Capt Nowell in the centre wearing the cap, there are few of the others we can at present identify positively: 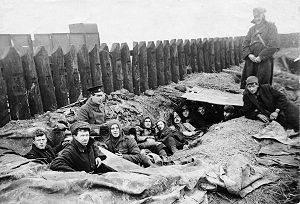 A newspaper photograph of the Frontiersmen marching on foot to the train station in Manchester is further evidence that the story that they took their own horses is another Legion myth. They eventually arrived at Ostend where they were armed, equipped and mounted by Belgian GHQ and sent to the 3rd Belgian Lancers. Writing in 1929, the Adjutant of 3rd Belgian Lancers said that “The arrival of French, English and even Russian troops had been promised from the beginning, but up to date, with the exception of a few London buses seen at Bruges, we had not seen a single allied soldier. One day the Colonel’s secretary appeared in khaki to show and accustom us to the British uniform. Then the general situation was not very bright, but the soldiers’ moral[e] was still very good.”2 The first British troops they were going to see were to be wearing, not khaki, but Frontiersmen uniform. On October 13th “…looking very fine, dressed as cowboys, with big smasher hats, the ‘Canadians’ joined the regiment. They were the first Allies we had seen since two and a half months’ camping, retreat, fatigues, hunger and bravery. They raised no small sensation, and got an enthusiastic and sympathetic welcome. They formed the 5th platoon of the 3rd Squadron, under Commandant J Fontaine, who spoke fluent English. Their arrival was quite an event in the 3rd Lancers, and more emphatically and indisputably constituted for our men, already unused to war, a great moral comfort. These men called themselves Canadians, and wore on their shoulder straps the letters B.C.H. ‘British Canadian Horse’; the same letters were branded on their horses and their war cry was ‘B.C.H.’… All had cameras or small cinemas [sic]. They were enterprising lads, looking for adventures to write and scenes to photograph for the English press to which most were correspondents.”3

The English translation by Baron Jolly has a note that “actually the word was Colonial” attached to the mention of them being Canadians. It is possible that the men were happy to be thought of as Canadians in order not to upset Col. Driscoll any more than possible. Driscoll, although very defensive of all his Frontiersmen was known to be somewhat fearsome in private with junior ranks who stepped out of line.

But…did some Canadians actually come to Belgium and join up with the B.C.H. to make it also more logical for them to be known as Canadians?

With acknowledgments and thanks to the Legion’s official New Zealand historian, Bruce Fuller, for his recent researches.

Next Belgium article: “The Fog of War”