RCMP and the Frontiersmen 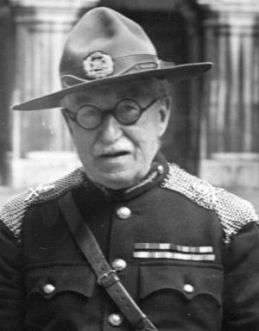 by members of the Historical & Archive Section,
Legion of Frontiersmen (Countess Mountbatten’s Own)

Although the Frontiersmen acted for many years in Canada as a version of Special Constables, their biggest success was the official, albeit short-lived, affiliation to the R.C.M.P.. In 1935 the Founder undertook a recruiting World Tour for the Frontiersmen. The final leg took him across Canada from west to east. As well as visiting many Frontiersmen units, Roger Pocock met many in authority in Canada, especially in the R.C.M.P. where he was still held in respect, as he had never ceased to champion the Force.

By Authority of the Honourable, the Minister in Control of the Force, The Legion of Frontiersmen is hereby affiliated with the Royal Canadian Mounted Police, in the same manner as Units of the Canadian Militia are affiliated with regiments of His Majesty’s Forces in the United Kingdom. 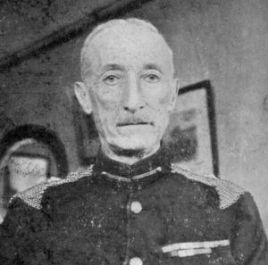 In 1939 the visit of King George VI and Queen Elizabeth to Canada called the Frontiersmen into action as a successful and efficient back-up to the R.C.M.P. This was to be the high point, as in October 1939 the R.C.M.P. terminated the affiliation due to internal squabbles and divisions within the Legion.

What had happened to cause this? Louis Scott was a strong leader, but that was not enough. He was not in a position to travel across the country to west and east – a time-consuming and costly exercise in those days. There were also political rivalries between the Prairie Provinces and Eastern Canada. Although they were happy to have orders from their Imperial Headquarters in London, the Eastern Canada Frontiersmen objected to being commanded by a man who they had never met and who was from a Prairie Province. As to British Columbia, the Frontiersmen there considered themselves closer to the British Mother Country than any other Canadian Province. Until evidence recently came to hand, the accepted version of events was that of Scott’s Frontiersmen published in their own Canadian journals. It was claimed that Capt. Fitzgerald of Eastern Canada travelled to London where he met Cdt.-General Morton. He persuaded Morton that Canada was too big to be run by one man. Morton agreed and directed that Canada should immediately be split into two Commands, Western Command under Scott and Eastern Command under Fitzgerald, who had the advantage of having many friends in the Canadian seat of Government in Ottawa. Fitzgerald had served in neither the British or Canadian armies, but claimed to have been an officer in the United States Engineers. Fitzgerald did visit London in 1938 and attended both the AGM, where he spoke, and the Parade and Inspection on Horse Guards Parade. He must have made an impression on Morton as “Colonel” (as he called himself) Fitzgerald claimed that his own “Q” Squadron with 122 members was the largest and most active Squadron in the Legion. It is doubtful that HQ had any way of checking that claim. V Sqn British Columbia was commanded by a Legion Captain (Major) H T Guest, the most senior Legion officer in B.C.. Guest was a relative of the very wealthy Guest family who made their money in iron and steel in South Wales. Guest was a wealthy stockbroker and exporter who often visited England. On a visit to London Guest made an appointment and called into HQ to meet Morton and Dunn bringing a letter from Scott as he had stopped over in Edmonton on his journey. Morton asked him a number of searching questions about CHQ in Edmonton and obtained Guest’s opinion.. Guest reported on what he knew and what he had seen. Afterwards he considered that he had been set up as the sacrificial goat and would get the blame for the decision to split Canada’s Frontiersmen into two Commands.. He promptly resigned from the Legion. Morton’s big mistake, which he later admitted, was to carry this division out arbitrarily without first consulting with Scott. In spite of the fact that he had served as a young man for a few years in the Canadian N.W.M.P., many years as a senior army officer had persuaded Morton that he only needed to hand out orders. He never really accepted that Frontiersmen can be led, not ordered. What Scott and his supporters did not know was that the R.C.M.P. had, very unofficially, suggested to IHQ that they were unhappy with the activities of some of Scott’s senior staff. At that time right-wing political views were not uncommon in Alberta and some of Scott’s men came close to being political in Legion uniform – totally forbidden in the Legion. IHQ had also received a letter from the highly-respected Larry Blain of Edmonton who in 1929 had been the man who re-vitalised the Legion in Canada and had persuaded Scott to be the leader. According to letters in our files Scott’s two most senior men, Arlidge and McGavin were alleged to be habitual drunkards, and often fighting drunks in uniform. Frontiersmen serving in these two men’s Edmonton Squadrons were considered by some to be of a poor type and also heavy drinkers. Blain wrote: 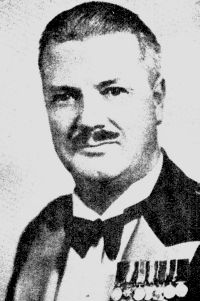 “In Edmonton we have four Squadrons…The O.C. of ‘B’ Squadron is not a fit person to wear the uniform of the Legion of Frontiersmen. There is not a Parade or meeting that doesn’t turn out to be a drinking bout. This while in uniform… We have Capt. Arlidge as Adjutant, who is a Drunkard and is despised by everyone who knows him. There is [sic] very few people who have not seen him at some place making an exhibition of himself…since I have mentioned the R.C.M. Police I might state that although they are proud to be associated with us in other parts of Canada, they do not think very highly of the majority of Frontiersmen here.”

In a letter to a British Columbia Frontiersman, seen also by IHQ in London, Blain wrote:

He [Scott] re-wrote the Constitution, which was passed at a H.Q. meeting in spite of protests by members elected by the local Squadrons and by myself. Owing to many protests by members this was brought up at the annual dinner, held months after, and was voted on by a show of hands, the majority present being drunk…This “constitution” places the control of the Canadian Division entirely in the hands of a few members of Canadian H.Q. The Charter was obtained without the knowledge or consent of IHQ and without the sanction of the members at an AGM and practically places the ownership of the Legion and all its assets in the hands of three men – Lt.Col. Scott, Capt Arlidge and 2/Lieut, McGavin, neither of the latter two men having seen any service. 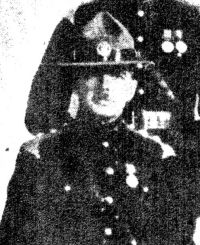 Scott was a clever man who was able to run rings around Fitzgerald and his supporters. Scott had gained the Dominion Charter mentioned by Blain, but this nearly turned the Canadian Frontiersmen into a private firm. IHQ had been told of the Charter, but had not been sharp enough to demand details in advance. Refusing to accept the division of the Legion in Canada, Scott broke his Canadian Division away from IHQ and even used the Charter to prevent Eastern Canada from using the name Legion of Frontiersmen. An increasingly frantic Fitzgerald bombarded IHQ with almost daily cables and letters. He was advised to seek a Charter under a different name, so Eastern Canada Command became “The Corps of Imperial Frontiersmen”, but fully affiliated to Legion IHQ in London.

Countless attempts were made to solve the problem, but the coming of the War put such matters to one side. The Canadian Secretary of State told both parties to concentrate on the War effort. When the War ended a new attempt would be made to resolve the problem. The Legion President, Lord Loch, had involved his many influential friends without success, but he indicated that after the War he would make a special trip to Canada to seek a solution personally. Unfortunately he died in August 1942. At the end of the War Britain was exhausted and the British Frontiersmen needed to concentrate all their efforts on rebuilding the Legion there. And so the dispute continued to simmer.

Had Morton and his Staff cared to swallow their pride and had consulted Roger Pocock early on with the full story, he could have contacted his many friends in Canada and probably resolved the matter. They did not; Pocock only heard Scott’s side and angrily supported him. A sad example of personal pride and arrogance of one or two men at the head causing untold harm to an organisation. Had so many mistakes not been made, the Legion might currently still be proudly claiming that affiliation to the R.C.M.P…

Article © 2010 Barry William Shandro. All rights reserved. This article may not be reproduced in any form, in part or in full, without prior permission.