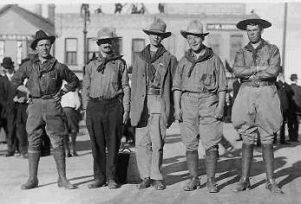 To date the available records and old news articles confirm the following locations as Legion of Frontiersmen commands or detachments. Strengths are not known for most commands and detachments.

References may be obtained from the author’s more detailed “Legion of Frontiersmen Timeline” for Canada or contact B.W. (Will) Shandro, Edmonton, Canada. Referenced critique and corrections are invited.

1905 – Montreal, Quebec. – Albert Dean Willcocks (or hyphenated Dean-Willcocks) the “Organiser for Canada” of Montreal begins his efforts with a letter to the RNWMP; however, no Montreal unit is noted until 1913.

1907 – Edmonton, Alberta. – J.V.E. Carpenter is noted as the Organizing Officer in Edmonton Alberta. Edmonton Command’s establishment date is not recorded. As well Strathcona (south side of Edmonton) is known to have had a separate Command in the Edmonton area. Other Organizing Officers were appointed for Lloydminster and Stettler; however, no records of LF units in these areas have been discovered to date.

1909 – Whitehorse, Yukon Territory. – In letters regarding Legion of Frontiersmen Camp No. 1 in “White Horse” (today spelled ‘Whitehorse’) Yukon Territory receives permission from the RNWMP to use the RNWMP “machine gun” for training.

1910 – Carmacks, Yukon Territory. – Yukon Camp No.1 Commandant is F. Harbottle and the reported location of Camp No.1 is at, Carmacks. Carmacks, YT is also the address on the enrolment form of S. Rowlinson. L.F. Form 6, numbered 517, the Legion of Frontiersmen Certificate of Enrolment.”

1911 – Vernon, British Columbia. – Okanagan Squadron formed about April 1911, headquartered at Vernon BC and led by Legion Captain J.P. Audy (killed in action WW1), note correct name is Prosper John Theodore Audy. No. 1 Troop under command of Legion Lt. H.C. Verral is at Vernon with No.2 Troop listed as Nelson.

1911 – Labrador and Newfoundland Command. – This command formed about April 1911 by A.W. Wakefield of Battle Harbour. It is reported that Wakefield is the Commandant (on active service WW1) and the secretary is F.E. Heath of Rigolet. The formal structure of this command is noted as: “A” Squadron St John’s leader E.W. Vere-Holloway (commanded LF gunners, St. John’s harbor WW1); No.1 & No.2 Troops responsible to Vere-Holoway with Troop No.3 leader Joseph Walters of St. Anthony’s, and Troop No.4 led by Mr Hutchins of Bonavista Bay. “B” Squadron leader was A.W. Wakefield of Battle Harbour, with No.5 Troop led by J. Ford of Nain, No.6 Troop led by T. Evans of Hopedale, No.7 Troop led by H.I. Paddon of Grand River, and No. 8 Troop led by H.B. Williams of Red Bay.
– Regarding Newfoundland (above mentioned) “The branch at Battle Harbour with the assistance Dr. Seymour Armstrong and Martin Spencer established sub-units at St. Anthony (50 men) and other Labrador communities of Grand River, Mud Lake, Nain, and Red Bay.”

1912 – Dawson, Yukon Territory. Dawson Troop formed in about October 1912 and led by Legion Lieutenant A. Hart who later made his way from Dawson to England so that he could enlist with the 25th Royal (Frontiersmen) Fusiliers.(invalided WW1).

1912 – Mud Lake, Labrador troop of Frontiersmen pose for photo at the “present arms.” This photograph is available through the Northwest Territory Archives in Yellowknife.

1912 – St. John’s, Newfoundland. – “A branch of the Frontiersmen was established in St. John’s in 1912 by E.W. Vere-Holloway and was made up of ex-members of the boys brigades who qualified. A pre war total of over 150 made up the Newfoundland Command.

1912 – Chilliwack Valley sub-unit (troop) secretary J. Worral reports that the sub unit is invited by the local Militia Corps in to take part in a camp on Vancouver Island.

1913 – Chilliwack, British Columbia. – The Chilliwack Valley Troop was formed about January of 1913, the Organising Officer being H. Hastings.. (See 1912, a previous entry).

1913 – Toronto, Ontario. – The troop formed about February 1913, leader W.H. Slater (invalided WW1), secretary J.S. Warren. Two hundred and eighty (280) members of the Legion of Frontiersmen have enlisted with the 36th Peel Regiment for active service. They were to go overseas with the third contingent of the CEF.

1914 – Medicine Hat, Alberta. – Medicine Hat Squadron, is formed about 1914, secretary E.D. Gower. Near the end of WW1, No. 920 in the Legion, Captain B. Oxley of Medicine Hat writes: “For two years I was acting commandant of the whole of Southern Alberta, a district larger than the South Island of New Zealand. I sent nearly 400 Legionaires [sic] into the first Canadian Expeditionary Force, and then I helped raise the 210th Frontiersmen Battalion, in which I was a major, and we trained at Camp Hughes. The badge of this regiment is the Legion badge. I was told, however, that owing to my age I could not be allowed to go to France, so I had to resign and see the regiment go without me.” [Southern Alberta Command HQ was Medicine Hat, Central Alberta Command HQ was Calgary, Northern Alberta Command HQ was Edmonton].

1914 – Regina, Saskatchewan. – Establishment date is unknown; however, 50 men of the Regina Command of the Legion of Frontiersmen promptly made their way directly to London and meet with Lord Kitchener convincing him of their readiness for action. It would be four more weeks before the first Canadian contingent officially arrives in England on October 14.

1914 – Victoria, British Columbia. – Establishment date is unknown, but it is before 1914. Seymour Rowlinson wrote in 1914 that upon declaration of war Victoria BC Command under was drilling three nights a week at Beacon Hill Park. ELLIOT’S HORSE. Victoria lawyer R.T. Elliot and Victoria citizens raised a private unit called Elliot’s Horse. Most of the Vancouver Command, some sixty members, travelled to Victoria to amalgamate with Elliot’s Horse. This unit was both equipped and transported by private funding to England, reporting for war service as a unit. In England the unit was disbanded and members went to serve in various British formations. According to one source, 40 of Elliot’s Horse went to the Belgium Army’s 3rd Lancers and only 15 of them survived the war. (Note: While members of the LoF did serve with the 3rd Belgium Lancers, other reports differ.)

1914 – Ottawa-Kingston, Ontario. A 1976 retrospective reference states that the history of Frontiersmen Units in the Ottawa –Kingston areas goes back to before the 1914-18 War. In 1914, a whole Troop joined the 4th Canadian Hussars (militia) – later to become part of the 8th Canadian Mounted Rifles overseas”.

1914 – Ft. George, British Columbia. A reference to recruitment of a Legion of Frontiersmen in Fort George shortly after the 1914 Call-to-Arms is mentioned in a paper of a University of Northern British Columbia researcher.

1915 – Victoria, British Columbia. A home guard unit known as the VICTORIA VOLUNTEER MOUNTED RIFLES under the command of Lieutenant John Briant Howes formally transferred all rank and file into the Victoria Legion of Frontiersmen.

1916 – Winnipeg, Manitoba. Little is currently known about Winnipeg and the Legion of Frontiersmen. The following Edmonton newspaper quote provides some evidence of an established Winnipeg LF Command. “ So far information obtained to the effect that Winnipeg Council passed a resolution calling on government assistance in providing arms for the Frontiersmen and Home Guard.”

1917 – Edmonton, Alberta. “The formation of the Edmonton Battalion Reserve Militia was absolutely necessary in order to give governmental sanction to the Legion of Frontiersmen that they might complete their usefulness…to train men who had to stay at home to be of service in case of trouble arising. By being a body of trained men it frees more men of military age and fitness for actual overseas service. There is no use in loyal citizens saying that when trouble comes he will be there, because without training he would be of no earthly use”. P.C.H. Primrose, Officer Commanding, Edmonton Battalion Reserve Militia. (RNWMP Superintendent, LOF Commandant, Police Court Magistrate, later Lieutenant Governor of Alberta).

1917 – Moose Jaw, Saskatchewan. On 16 March 1917 the King’s Colours were presented to the 210th FRONTIERSMEN BATTALION C.E.F. by Lady Lake, wife of Saskatchewan’s Lieutenant Governor Sir Richard Lake. Similarly, Mrs. Seaborn wife of the Commanding Officer of the 210th Frontiersmen, presented the Regimental Colours. The author believes that other Commands were started in Canada on or before 1914; however, they are yet to be found in some file or within the text of century old newspapers.

It is believed that other Commands were started in Canada on or before 1918; however, they are yet to be found in obscure files or within the text of century old newspapers.

Article © 2012 Barry William Shandro. All rights reserved. This article may not be reproduced in any form, in part or in full, without prior permission.