Links with the Loyal Edmonton Regt. 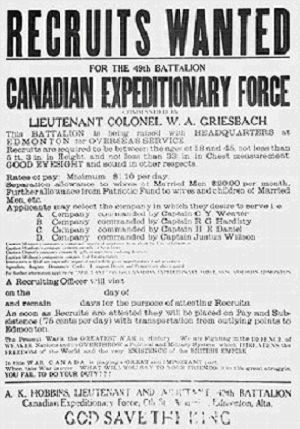 In 1915, the 49th Battalion, Canadian Expeditionary Force (today the Loyal Edmonton Regiment) was recruiting for overseas war service. To speed the recruiting process each Company (A, B, C, D) recruited distinct bodies of men.

While the 49th Battalion’s recruiting poster clearly specifies each body of men, the composition of D Company has been completely misunderstood, possibly for want of background information.

The “Frontiersman” (notice capital ”F” in this basic rank) belonged to a quasi-military association under command of Justus Duncan Willson. Records indicate thousands of Frontiersmen were organized, uniformed and practicing military skills in support of Empire. Immediately at the 1914 call-to-arms these Frontiersmen (vs the generic word “frontiersmen”) rushed to the colours of many of the Empire’s regiments.

While the composition of companies A, B, and C has been repeatedly reported as indicated; sadly, the colourful irregular unit that formed D Company has in publications past been an ignored or a misrepresented aspect of the Edmonton regiment’s unique beginnings.

Article © 2010 Barry William Shandro. All rights reserved. This article may not be reproduced in any form, in part or in full, without prior permission.