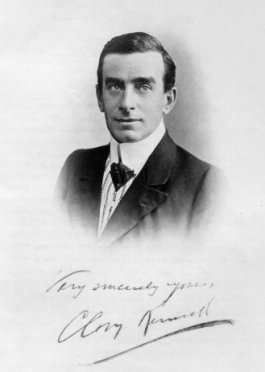 Topic August / September 2022. To follow the previous topic page, another instance of a sad and early death is that of Charles Cory Kernick. Kernick was a world traveller and this was before the days when travellers to less civilised countries of the world could be inoculated against unusual and tropical diseases. You took your chances – plus a bottle of whisky and some quinine and hoped for the best. Kernick did not survive, and left behind him a young and deeply grieving widow.

It is not strictly accurate to call Charles Cory Kernick the first Adjutant of the Legion of Frontiersmen, although that was his duty if not his title. He was the Legion’s first Secretary, as at first it was organised more as a club and it was not until men such as Lt.Col. Driscoll came to prominence in the Legion that it took a more military style and semi-military ranks. In the early days many members and supporters in London, where the Legion had its power base, were either titled aristocrats or semi-retired senior officers. These men were always known by their titles or ranks. Such a man was Lord (Charles) Frederick Brudenell-Bruce, the youngest son of the 3rd Marquess of Ailesbury who held the rank of Major in the Royal Wiltshire Yeomanry. Lord Freddy, as he was always known, was a wealthy man and would regularly host dinners for the early London Command. Many of those Command members were of a suitable social status for him to dine with. Although Roger Pocock was just a writer and an adventurer, he was a junior member of an acceptable Berkshire family. In those days social status meant a lot. The strict class barriers of the Victorians were just beginning to be opened a fraction, although this would take many years. In the Legion of Frontiersmen, aristocrats and men who had toiled manually on the same frontiers soon found they were able to swap stories and mutual experiences in the men’s club atmosphere of a Frontiersmen meeting.

Kernick was born on January 20th 1868 but died of what was registered as a stroke in Argentina a month before his 41st birthday. He was a nephew of the world famous coal merchants and shippers, Cory Brothers of Cardiff. It was sometimes said that the British Empire was founded on coal. The Corys had made themselves very rich on it. As a nephew rather than a son of the business, from 1887 to 1902 Kernick found himself employed to travel the world for the company. His job was to broker deals and make arrangements for new mines. He was diplomatically skilled, but the travelling in those days before modern medication destroyed his health. He was not a big man – 5’8” tall and only 8½ stones (119lb.) in weight. His first wife died for reasons we do not know when in India with him. Writing about him after his death, his second wife said:

“When a youth of twenty-three, at Santos, he had yellow fever; but in his electric way he pulled himself through it, although actually within the very portals of death. On his return from Mexico, Cuba, Florida, and the Southern States of America (January 1896), he was carried ashore from the Liner at Liverpool to Hospital, down with diphtheria. The end of the same year, in Roumania, he had small-pox, through nursing an acquaintance there, who was laid low with that dreadful disease… Subsequently he suffered in India, and also when in Africa, both times, and when for the second time both in Central America and in South America, from recurrent malaria and a disease of the kidneys – both of them scourges of hot climates.

“…In the summer of 1902 a London physician whom he consulted, told Charlie he had not three months to live.”1

Roger Pocock appointed Kernick as Secretary to the Legion on 20th June 1905. This was confirmed at an Executive meeting at the White Room at the Savoy Hotel in London on 28th July with Lord Lonsdale himself in the Chair. Lord Freddy gave one of his dinners for the Executive Council. On the following Wednesday the Executive Council met in Committee Room 16 at the House of Commons with Sir Henry Seton-Karr, M.P. in the Chair. At this meeting Roger Pocock was named as Founder and “Registrar”. We can see from this that the early Legion was strongly supported from the ruling classes and had access to meeting rooms they could never dream of entering in later years. With such titles as Secretary and Registrar they had also not yet moved to any military style ranks.

Kernick made it his personal campaign to take the Legion position to an even greater level of acceptance and bombarded the War Office with requests for recognition. This finally brought fruit in February 1906 to Kernick’s great satisfaction with the now infamous War Office letter that the Legion regularly and inaccurately claimed gave them Government recognition. The wording of the letter was something that the War Office and its successors were to regret deeply, as the misguided and the foolish constantly annoyed the authorities by taking the words “recognised it” out of context and made the false claim that the Legion was “officially recognised” in 1906.

“…on February 15th 1906, the Secretary of State (Mr. Haldane) expressed his sympathy with the aims and objects of the Legion, and, noting that the Association was to be self-governing and self-supporting, in time of peace, recognised it as a purely private organisation, in no way connected with any department of State, but one which should a suitable occasion arise he might be able to utilise.” (T.N.A. WO10426)

In following years the War Office constantly back-tracked in order to claim that it “took cognisance of” rather than recognised the Legion, although any difference in meaning would be lost on the common man.

The position was not one that such a regular world traveller as Kernick could hold as a permanency, Headquarters being based in London. Kernick left London on August 16th 1906 for the West Indies, returning at the end of October. On March 6th 1907 Kernick sailed from Liverpool for Buenos Aires but was never to return from Argentina, dying there in early December 1908. Kernick’s journeys always started and ended in London, which he loved and affectionately called it “the little village”. For the period he was involved, he had thrown himself with greatest vigour into his position with the Legion.

“…life to Charlie was a thing to be lived intensely; every instant of it must be lived to the uttermost. The effort of living upon his own high platform also, and of performing the tasks which he set before himself as ‘things he must do’, was too much to sustain, save for a short time. He hurled himself headlong into his day’s work every day, for he ‘loved work’; there was never anything automatic about him; and ‘as for mediocrity, he hated it’…”2

Until we began investigating his life, the name of Kernick was just a brief mention in the archives, although the letter he managed to extract from the War Office in early 1906 has never been forgotten. Charles Cory Kernick was one of a breed of Frontiersman we will never again see.

Quotations from “Wanderings of a World-Farer” by Charles Cory Kernick, edited and privately published by his wife EM. F. Cory Kernick, 1911

The photographs show Kernick in 1906 and London Frontiersmen in 1905. Kernick is sat on the right hand side of Roger Pocock.

1 Response to The First Adjutant