The Perils of Hurried Handwriting

How did this happen? There is a simple explanation. There are very few people who can say that their handwriting is always totally clear. The Founder of the Legion was no different, and when in later life he replied to a letter asking for the names of the first twenty founder members of the Legion of Frontiersmen, he was to cause confusion to later generations by writing in a hurry. One name was transcribed by the recipient as the famous LORD HALDANE rather than the much lesser-known LORD HALDON, a peerage now extinct. We now have much more information on the life of the Legion’s Lord Haldon than we did when we wrote briefly about him seventeen years ago. 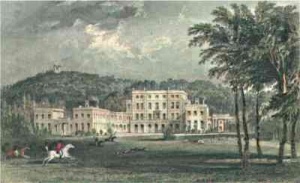 Our man, the 3rd Lord Haldon, died almost penniless, although he was descended from Sir Robert Palk who was reputed to be one of the richest men in England during the late 1700s. He purchased 11,600 acres of Devon countryside together with Haldon House which he extended to a be a very grand house. All that remains today is the stable block and staff quarters which have been converted into what is now the Best Western Lord Haldon Country House Hotel. Lawrence William Palk was born in 1869 and inherited the title of Lord Haldon from his father in 1903. As heir to the 2nd Baron Haldon he grew up believing that there was nothing he wished for that he could not afford.

There is no doubt that he was deeply disturbed when his parents’ marriage broke down and his mother moved out of England to live in Naples where she became embroiled in a long legal battle with his father. That belief that the money supply was endless fell apart in 1892 when his spendthrift father was declared bankrupt and was forced to sell off Haldon House and all his lands to pay some of his debts.

The 3rd Lord Haldon’s first wife was a Russian actress Lidiana Crezencia who appeared in Drury Lane and the Old Tivoli theatres known as Madame Miska and claimed to be the only British woman of title on the stage. In spite of the fact that she was twelve years older than him and in the course of a divorce from her second husband, like many a young Victorian gentleman Lawrence William Palk was bewitched by a famous actress. They were married in 1893. The marriage, like his father’s was not to be a happy one. Their only son was born in 1896. They moved to Australia so that he could seek his fortune. He did make some money in the gold-fields and qualified as a mining engineer but did not make the money he sought to return to his life as a young London gentleman.

He had served in South Africa with the Imperial Yeomanry. Roger Pocock was a regular attender at London theatres and Musical Halls. This was largely through the influence and friendships of his sister Lena Ashwell and so through her would have known or heard of Madame Miska and her husband, although by 1905 the couple were living separate lives and Lord Haldon was attempting unsuccessfully to nullify the marriage. Lord Haldon, one of the original twenty founder members of the Legion of Frontiersmen, was several times a visitor to Adam Street during 1905 and Pocock records that Haldon was sleeping on the hearthrug for the whole of one week in June, although he does not give the reason.

In the First War, Haldon, in spite of strictly being too old to serve, joined up as a private soldier and was actually Mentioned in Despatches. In 1928 Lady Haldon died, and he married again to a widow a few years older than himself. This lady was Edith Brightman, widow of a Bristol boot manufacturer and dealer, who had enough money to live comfortably if economically. Lord Haldon then gained a little money and his new wife a distinguished title. No longer virtually penniless thanks to his wife’s money, they were able to rent a very modest flat in a London suburb. Within fourteen months, by April 1930, the widow’s money appears to have been almost spent, presumably by Lord Haldon. The couple were forced to move to a very cheap boarding house in Acre Lane, Brixton, London where they took a room at one pound a week, doing a little cooking on a stove at the end of the bed. All they owned when they arrived was a small suitcase each. The landlady said that they seemed very fond of each other. Lady Haldon had no idea of domestic affairs and the landlady had to go into the room to show her how to fry bacon. The biggest mystery of this odd marriage occurred one morning at the end of the month when Lady Haldon apparently went out to change her library book. She was not seen again until she was found the next day, May 1st, at the base of the 100-foot Black Rock cliff at Brighton having fallen to her death. A schoolboy reported to the Police that he had seen a woman fall over the edge. The press reported the inquest in detail, especially describing how Lord Haldon had collapsed in sobs at the end of his testimony. Lord Haldon broke into tears and said: “We were like Darby and Joan”. Although the court did not come to the verdict of suicide, the general public did. Lady Haldon had taken no handbag with her although she never left home without one, and yet her handbag was never found. The two unsolved mysteries were why she went to Brighton and what happened to her handbag.

This was not to be the end of Lord Haldon’s distress because a long-term confidence trickster with several children, both legitimate and illegitimate, came into the story. Lizzie Ireland (one of her names), who had known the second Lady Haldon before the marriage, saw an opportunity here and made her way to Lord Haldon’s simple lodging using her “friendship” with his late wife as an excuse. She soon began “comforting” Lord Haldon in his grief in ways in which she was well experienced.. She made sure that everyone in the lodging house knew that she was Lord Haldon’s intended wife and rumours extended further that she was engaged to his lordship. Sadly on 12 January 1933 Lawrence William Palk died, aged 63. He was succeeded by his son who had served in the First War at Gallipoli, Egypt and Mesopotamia but who never married. The 4th Lord Haldon, like his father, had a colourful and short life He had risen to the rank of captain, but in 1919 went ‘absent without leave’ and was also in trouble for bouncing cheques. In the 1920s he was convicted of stealing and was always another great worry to his father. Lizzie Ireland’s next project after his father’s death was to latch on to him, but his story is not a Frontiersmen one so you must find this elsewhere.

Most such replies as the the one sent by Roger Pocock are nowadays typed on a computer, but if you do send details in handwriting make sure it is clear. Inaccurate handwriting can, as in this case, cause a lot of problems – and handwriting is not something commonly taught in schools nowadays.

For more information on the Haldon family, especially the 3rd and 4th Lords see: https://royaldescent.blogspot.com/2016/09/ruvigny-continuation-descendants-of.html

For more information on Lizzie Ireland and her various aliases and relationships with the Haldons see: