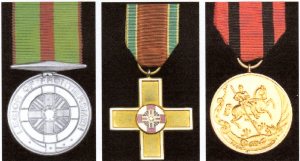 Topic June / July 2021. The Legion historians and archivists regularly receive enquiries about Legion medals. So far we have hesitated, the reason being that, whilst the story is reasonably straightforward until about 1975, the picture afterwards becomes extremely cloudy. Commands, independent units and breakaway groups all proceeded to introduce medals for all sorts of reasons – and of variable quality. It is not our duty to judge these medals or the proliferation, so we will concentrate here on the three Legion medals which were, and still are, issued by Headquarters with universal agreement and issued throughout all official Commands. At an Executive Council meeting in 2012 the Commandant-General of what has become Countess Mountbatten’s Own Legion of Frontiersmen reiterated that only the three medals should be awarded. This was confirmed by the Executive.

Of the later issues we will only add one: the Centenary Medal produced and issued to the then current members to commemorate one hundred years of the Legion. Obviously the passage of time will reduce the surviving numbers of Frontiersmen entitled to wear this medal.

It was not until the Legion had been in existence in excess of twenty years that any discussion occurred about the issue of a Legion medal for especially outstanding service to the Legion. Before the First War many Frontiersmen wore medals issued for one of the South African conflicts. After that war, in excess of 95% of Frontiersmen wore First War campaign medals and many had won gallantry medals. In fact, some squadrons could parade a whole troop of Frontiersmen with the Distinguished Conduct Medal.

Just an Inch of Ribbon tells the story of the DCM League and the Frontiersmen.

Discussions on a Legion “meritorious service” medal for long and exceptional service foundered on the cost of striking a medal. The Legion magazine ran at a loss and the Legion was existing hand to mouth. It only survived because the treasurer and Acting Commandant-General (he was never other than “Acting” as he did not want the position) Arthur Burchardt-Ashton constantly subsidised the Legion. Fortunately he was a wealthy man, but he was not willing to subsidise a Legion medal. A solution arose from an unexpected source:

As I heard the story, the L.M.S.M. was originally conceived by a member of the H.Q. Staff who himself had no medal at all. He had been a dairyman somewhere in South London when an uncle died and left him a lot of money. To get the idea of a Legion medal off the ground, as it were, he undertook to defray the cost himself, and did pay for the initial issues in my time.

This is from a letter 28th February 1975 from Squadron Leader J. H. Baird to Gordon Woods. Apparently, Baird had been unaware that the Legion still existed. In the 1930s he was the officer commanding Middlesex area and had presented the Legion with a fine cup to be competed for annually for mounted drill. The mounted Frontiersmen are too thinly spread around the world for the trophy to be competed for nowadays. Baird kindly donated to Legion Headquarters his album of photographs and documents from his time in the Legion plus his Legion badges. Needless to say, apart from a small newspaper cutting about a Frontiersmen trip to Belgium he had led, his donation, like many others over the years, has vanished.

Baird was probably correct about the way the cost of striking the medal was covered, but it is unlikely that an un-decorated dairyman would have had the experience to cause him to be elected to Legion Staff, unless like a number of old Frontiersmen he had previously been involved in revolutions in some South American country and was considered too old for service abroad in the war. Burchardt-Ashton was not accepted for war service abroad, but was used in remounts and then volunteered for the Y.M.C.A. in France. As a younger man he had experienced tough frontier work in Hawaii, when it was a far wilder place than now. Therefore he had no First War medals. The medal was struck in hall-marked silver. The ribbon is a 32mm wide green ribbon with 2mm wide brick red edges and a 6mm brick red stripe down the middle. A second silver striking was made in 1955 and a third striking in later years, but that one was in white metal because the cost of a silver medal had become too expensive. The medal was originally intended to be the sole Legion award and only presented for really exceptional service but, as with later medals, it was decided that many Frontiersmen were entitled to it. With the earlier issues the recipient’s name and Legion rank were engraved on the side. It required a minimum period of unbroken service of seven years. It was introduced in Legion Orders in January 1931 (Order number 2/1931). Paragraph 8 stipulated it must be worn on the RIGHT breast. This is in compliance with standard practice as Legion medals are counted as Association Medals, not official ones. This was subsequently altered to permit it to be worn on the left breast after all other medals. One can only assume that the Legion was held in such high regard in the 1930s, holding its annual parade on Horse Guards and inspected by a General, that unofficial acceptance of this change was made on the assumption that only a few Frontiersmen would have it awarded. It is the only Legion medal where permission was granted to wear it with and after campaign medals. Even that permission cannot be verified in an official letter.

As early as 1938, at the Annual General Meeting, a proposal was made for a Legion Long Service and Efficiency medal to be struck and issued. As in the British army, long service chevrons were worn at the bottom of the left sleeve of the uniform, but it was felt by some that, as this applied only to troopers, NCOs and officers had nothing to show their long service and dedication to the Legion. It was the subject of debate at that A.G.M. The original proposal was for seven years service and that the medal on the obverse should carry the head of the Founder, Roger Pocock. Pocock was at the A.G.M. and strongly opposed the idea of his head being on a medal.

Captain Pocock said that he wished the reference to the Founder’s head be deleted!

The Commandant-General said that he had attended a very large meeting in the Northern Command when this same matter was brought up for discussion. Many were in favour and they asked for his opinion. They had the L.M.S.M. and did not want to go on piling it up. It was only a privilege that they were allowed to wear that. For other ranks it had been decided that chevrons should be worn as in the army. He felt that would be the best thing, otherwise where would they stop. To give a medal for seven year’s service was somewhat ridiculous.

The President, Lord Loch, said that the view seemed to be that there should be some form of recognition for long and faithful subject. It would be discussed by the senior officers and the advisory committee and would be brought up again at the 1939 A.G.M.. Due to the war, the matter remained in abeyance until after the end of the war. The Long Service and Efficiency medal was finally struck and issued in 1951. It was awarded for ten years of service. A considerable number were awarded at parades during 1951. The original ribbon was red, 35mm wide with two 7mm black stripes centrally placed 7mm apart. This was later changed to a 32mm red ribbon with 6mm black stripes 6mm from each edge. Originally, also, the name of the recipient was impressed on the side.

In February 1975 it was decided to introduce another medal for exceptional service and loyalty, but not as high an award as the L.M.S.M.. This was to be the Legion Cross of Merit, a gilt cross with a polished edge. The ribbon is a 29mm rust ribbon with a green stripe at the edge 4mm wide with a yellow stripe 1mm on each side of the green stripe. Again, the name, Legion rank and number of the recipient used to be impressed on the back of the medal. 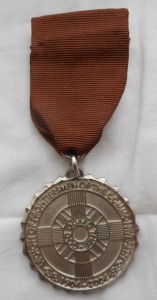 In celebration of the Legion of Frontiersmen’s hundredth year of founding, a white metal Legion Centenary Medal was awarded to members in good standing. It featured a plain brown ribbon reflecting the plain brown field of the Legion pennant designed by the Founder, Captain Roger Pocock. (That pennant featured in its centre the mural crown badge first adopted by the Legion in 1926. It is currently being preserved in the Roger Pocock Collection at the Bruce Peel Collection at the University of Alberta). This is the only Headquarters issue of a commemorative medal in the Legion’s history. Obviously, as it was only issued to members once, the medal will become rarer over the coming years as those members cross the final frontier.

Legion of Frontiersmen medals are reserved for wear at Legion of Frontiersmen events and Legion HQ Orders have been issued over the years that they are not to be intermingled with the Sovereign’s officially issued medals. As to other medals which appear on the collectors’ market, some of which had considerable meaning in the country of issue, we will leave others to comment, describe and, if necessary, pass judgement. Considerable details of such medals can be found in:

although this book has become rather rare.

Author of windowsintohistory.wordpress.com Co-writer on junkyard.blog Editor of frontiersmenhistorian.info
View all posts by Roger Pocock →
This entry was posted in Frontiersmen, History, Latest Topic, Legion of Frontiersmen and tagged Medals. Bookmark the permalink.

1 Response to Legion of Frontiersmen Medals