Frauds and Fakes in Frontiersmen Uniform 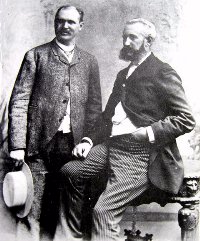 There is no doubt that the Legion of Frontiersmen uniform is a striking one which draws attention wherever it is worn. It is hoped that it is only worn by those who wish to uphold the principles of the Legion. Sadly, over the years the opportunity to wear the uniform has attracted some whose only wish is self-aggrandisement. Fortunately the official Legion has usually been careful in weeding out the “Walter Mittys” who have wished to join. They have often moved on to other groups who have usurped the name of the Legion and illegally set up variations on the name. In recent years we had the notorious case of the leader of one such organisation who falsely claimed to have won the Military Cross. There have been other fakes and frauds and a few have even succeeded in staying within the official Legion and achieving senior rank. One of the duties of historians of the genuine Frontiersmen has been to investigate the lives and claims of past members and some fakes and frauds have come to light. There has to be something about the Frontiersmen uniform that can occasionally attract either men of great insecurity or pathological liars. Some who have not been successful in joining the official Legion have signed on with fake Frontiersmen groups. Of course almost everyone who has joined over the past 100 years has believed that to be a Frontiersman is honour enough for anyone. The problem for the Legion of Frontiersmen is the merest handful whose lies have been noticed outside the Legion and who have brought disrepute on a fine body of men and women. These may have been charming rogues greatly liked by their fellows, but liars they were.

The first rogue of the Legion was Colonel Manuel Herrera de Hora, the first London Commandant. For a start, this was not his real name. He was christened Henry George Melville Hora but was known by many other names, including Henri Melville and George King. He was such a plausible liar that his stories were believed by many of his fellow Frontiersmen as well as others outside the Legion. However, to know the full amazing story of de Hora, we strongly recommend Bruce G. Fuller’s biography of him de Hora: A man of many places & many names1.

There have always been those who hankered after titles: to be called “Lord” or “Count”. Another early Frontiersman and well-known author, William Le Queux, was a Count of Montenegro. “Count” Edward Johnston-Noad was also a Count of Montenegro. After the First War, the exiled King of Montenegro helped his finances by selling titles in his country, although that country had no history of using titles. He did manage to sell one Dukedom, but a number of men were more than happy to pay for the use of this fake title of “Count”. Johnston-Noad was the illegitimate son of a very wealthy American, John Howard Johnston, and a French woman. The father’s main claim to fame was that he set up the most successful commercial brewery in Peru.2 When he died in 1913 he left his substantial fortune in trust to his illegitimate son Edouard, who became naturalised British in 1922 and took the name Edward Johnston-Noad. Johnston-Noad became a solicitor. He raced yachts and was also a qualified pilot. In addition to commanding the Maritime Division of the Legion of Frontiersmen between the Wars he also set up the Legion Air Command. In November 1934, he made headlines in the British Sunday scandal-sheets. He had got into an argument with his lady friend (his “landlady”) and had discharged his revolver in her direction. When the case came to court, the lady and her staff changed their stories and he was acquitted. He was, however, fined for having well over 1000 rounds of ammunition in his room.3 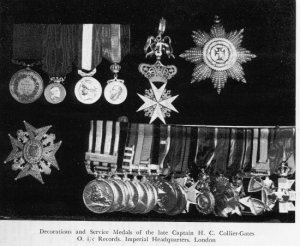 The most surprising of these fakes and frauds is “the most decorated man in the Legion”, Horace Cecil Collier-Gates whose collection of around 40 medals has been on display at York Castle Museum. The Curator of Military History there has appeared somewhat reluctant to answer our queries but did comment that he had “serious concerns regarding this group of medals. Many are re-named examples or have other naming anomalies.” Although Legion Major Collier-Gates served as Records Officer, none of his records appear to have survived. Also, although there have been many stories written about his claimed life of adventure, strangely none seem to have come from his own pen but only from tales he told to other Frontiersmen. The simplest diagnosis is that the man was a pathological liar. It is interesting that our research coincided with the publication of a new biography of Col. Richard Meinertzhagen by Brian Glanfield. Meinertzhagen served in East Africa and knew Driscoll and F.C. Selous. His comments on the 25th Bn Royal Fusiliers (Frontiersmen) have been regularly quoted (and misquoted) by other authors although we have doubted their accuracy, preferring other contemporary accounts. Meinertzhagen’s stories of his life were a web of fictional adventures woven around a few truths and are well explained in Glanfield’s excellent biography.

Collier-Gates claimed to have been born in 1865 in Scarborough, the son of a doctor, been a pupil at Harrow School, known “Buffalo Bill” Cody, fought in Egypt 1882, and at the Riel Rebellion in 1885. However his birth certificate shows that Horace Cecil Gates was born in Exeter in 1877 so all this was impossible. The “Collier” appeared some time later and also in later life the additional first name of Valentine was sometimes added. The military file of Lieutenant H.C. Collier Gates at the British National Archives confirms this birth year. It seems certain that as a young man he did make his way to South Africa where he fought in the Matebele uprisings and then in the early part of the Boer War in a small unit in the Transkei, the T’somo Mounted Rifles.4 Our psychiatric adviser said that the pathological liar syndrome often comes on as the result of some trauma, such as in war or battle.

In addition to the Egypt 1882 Medal and N.W. Canada 1885 Medals worn fraudulently, his China 1900 and Zulu Rising 1906 medals are highly suspect. He certainly made his way to America. The claim that he worked with the Wright Brothers is unproven and unlikely, but he did gain aeronautical engineering experience, because in 1917 he was working at the A.I. D. Farnborough and was a “W” Reservist which meant that he was undertaking valuable duties as a civilian that made him exempt from call-up. Nevertheless he was granted a temporary commission as 2nd Lieutenant in April 1917 as an Equipment officer. For some unknown reason he was specifically excluded from flying duties, although the letters of recommendation (copies only) he supplied stated that he had been a flying instructor at Pensacola, Florida in America. Stories of his “adventures” as a pilot appeared not only in the above magazine, but also in a journal “Reveille” about 8 years after his death.

In dog-fights over France, he shot down several enemy aircraft before transferring to the new bombers. After 1918 he made a dangerous flight over the mountainous North-West Frontier in India, to bomb rebellious tribesmen.5 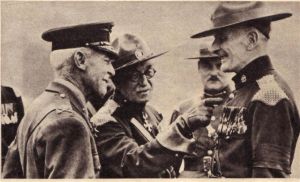 This is absolute rubbish. His other claimed qualifications on his application form were an M.A. from Harvard in 1893 and a BSc from London University from 1897. Strangely his obituary as a notable “doctor” both in The Lancet and the B.M.A. Journal from December 1951 changes this Harvard qualification to a medical one as a doctor. Sadly, his claims to have qualified at Harvard Medical School were fraudulent. They have confirmed to us that no man of any name even similar to Collier-Gates ever studied medicine at Harvard in the relevant years. Harrow School told us that he never, as he claimed, attended that esteemed establishment. He fooled everyone, probably even King George VI. A 1948 account of a Buckingham Palace garden party in The Times6 describes the King talking for an unusually long time to “a veteran of the distant Matebele campaigns” in Frontiersman uniform. This was probably Collier-Gates whose chest full of medals would have attracted the King. In the photo shown here, Cdt.-General Morton is seen examining Collier-Gates’ medals with a Major-General inspecting the Frontiersmen. The most extraordinary story about him is that he was presented by Hitler personally with the Iron Cross for saving some lives at a fire in a Berlin Hotel. According to an alternative version in his Lancet obituary, the medal was presented to him by Kaiser Wilhelm. In this version the hotel fire was in Frankfurt. Possibly it is even more extraordinary that these tales were believed! Meinertzhagen also made false claims of meeting Hitler.7

Adopting titles of Orders of Chivalry and of organisations that ceased to exist many years ago seems to have become a more common practice in recent years. Reading all this, you might just wonder whether there are possibly still just a few today wearing some version of what they call Frontiersmen uniform while sporting a fake title and/or wearing the regalia of some fake “Order of Chivalry”.

2 Backus and Johnston is still the largest brewery in Peru and well known world-wide in the brewery trade. For details of their history see www.historiacocina.com-historia-cerveza-peru.htm

5 Undated cutting from Reveille in Legion of Frontiersmen archives. Following his death, accounts of what was believed at that time to be his life and adventures appeared in a number of Frontiersmen publications. The greatest detail is to be found in several issues of the New Zealand journal The Frontiersman, although the stories have been often repeated over the years.

7 Brian Garfield, The Meinertzhagen Mystery: The Life and Legend of a Colossal Fraud, (Washington D.C.: Potomac Books Inc. 2007) This excellent book is available from Gerald Rilling of East Africa Books:- eafricabk@ix.netcom.com  For Meinertzhagen’s claimed meetings with Hitler see pages 188-192. An important point regarding Collier-Gates’ claimed meeting with Hitler is on page 190. “…no foreigners were allowed into the presence of Hitler until the meeting had been authorised by an agreement between the Nazi regime and the foreigner’s embassy, which had to vouch for the visitor.”

The article above was originally published on http://www.frontiersmenhistorian.info in August 2007 and has since been revised and updated.

© Copyright Geoffrey A. Pocock. All rights reserved.  This article may not be reproduced in any form, in part or in full, without prior permission.