The Legion of Frontiersmen in World War I 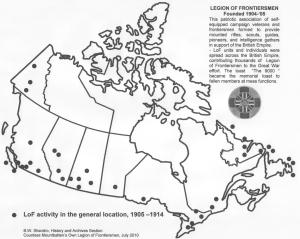 Location of Frontiersmen units in Canada 1914

The Legion of Frontiersmen was founded in London, on Christmas Eve 1904. Immediately following on 26 December 1904 a letter in British National newspapers suggested an organization to organize Imperial campaign veterans, adventurers, patriots and men with experience of in the world’s frontier regions. The Legion was to act as an irregular force of mounted rifles, scouts, guides, pioneers (military labourers and craftsmen with fighting ability) and especially intelligence gatherers. This new Legion of Frontiersmen was to react as a ready force until the regular Imperial forces could be deployed to the regions; or to immediately enlist if called upon.

At inception the LOF had the support of influential persons including support from Lord Lonsdale, The Earl of Onslow, Prince Louis of Battenberg of the Admiralty, Canada’s Sir Sam Steele, officials several of the Civil Forces, Municipal Police, Fire Brigades, etc. and such units as the Federated Malay State Volunteers, Newfoundland government, and the army of the Sultan of Jahore. 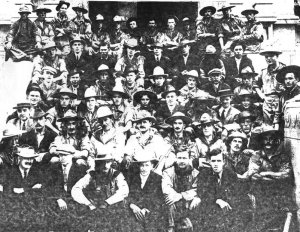 Lieutenant-Colonel D.P. Driscoll DSO, commanding the 25th Royal (Frontiersmen) Fusiliers enroute to British East Africa, writes as the CEO of the Legion of Frontiersmen that “some 7000 men of the Legion are on active service”. He then states “nearly 50 per cent of Princess Patricia’s Canadian Light Infantry are members of the Legion”. DAILY MALTA CHRONICLE, 1915.

A 1916 letter responding to the 218th (“Irish Guards”) Battalion CEF stated to that time 1600 Legion of Frontiersmen of Edmonton Command had already enlisted for military service, etc.

60 LOF were recruited from Remounts

LOF form one of the six squadrons

Form ‘D’ Company under own Commandant

The above article has been contributed by Barry William Shandro M.Ed.

Author of windowsintohistory.wordpress.com Co-writer on junkyard.blog Editor of frontiersmenhistorian.info
View all posts by Roger Pocock →
This entry was posted in Frontiersmen, History, Legion of Frontiersmen, World War I and tagged Prince Louis of Battenberg, Sam Steele, WW1, WWI. Bookmark the permalink.

5 Responses to The Legion of Frontiersmen in World War I