The First Frontiersmen in Malta 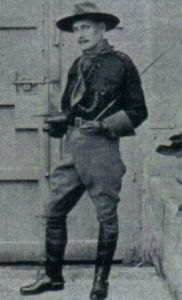 Captain Cyril Bowden, Secretary of the Legion of Frontiersmen Malta Unit and Organising Officer for Mediterranean Command at Malta 1912 to 1918

The first news to reach Malta about the Legion of Frontiersmen was an item in a local newspaper The Daily Malta Chronicle on 29 August 1907. It gave details of a pamphlet titled The Legion of Frontiersmen being formed which set out the scheme and object of the Legion. It described how the origination as a civilian self-governing and self-supporting body of Frontiersmen throughout the Empire united together for the promotion of peace whose service was available to be called upon for defense in time of war.

The term Frontiersmen included men trained and qualified by previously military training or by working, hunting or fighting in wild countries, or at sea, who for various reasons did not wish or could not serve in an existing military force of the Empire, who was not prepared by reason of temperament or vocation to submit themselves to the ordinary routine of military discipline except in time of war.

The Scheme of the Legion had been laid before the Secretary of State for War on 15 February 1906, who had stated that he recognized it as a private organisation which “should a suitable occasion arise he might be able to utilize”.

The chairman of the origination at that time was the Hon Earl of Lonsdale and all inquiries to the Frontiersmen were Addressed to The Commissioner and sent to No 6 Adam Street Adelphi, London WC.

Part of the Malta unit’s training included lectures which were held in a classroom at Collegiate School No 200 Porto Reale (known today as Republic Street Valletta) with the permission of the principal Mr. Robinson. These lecturers were held on Monday evening at 8.45 pm. Lieutenant Morrel of the Royal Engineers was one who gave lectures to members of the Malta unit on surveying and pioneering.

Other training was shooting practice. The Legion used the Silesians Institute Rifle Range in Sliema and Pembroke Rangers at St Andrews (still used today but only by the Armed Forces of Malta). Their meetings were held on a Monday, Friday and Saturday in the afternoons. The Secretary for the Legion in 1915 resided at 63 Strada Reale, St Julian’s and the Executive committee held their meetings at 70 Strada Fose Floriana. 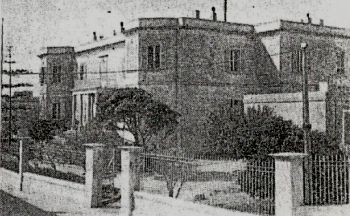 St George’s House, where Captain Bowden recruited men for local unit or the 25th but there is no evidence to show any of the local Frontiersmen enlisted with the 25th when the battalion arrived at Malta.

After the outbreak of World War I it was reported that the War Office had accepted the Legion of Frontiersmen for active service and the first contingent was shortly to be mobilized. Members of the Malta unit were also given the opportunity to join the Expeditionary Force. The Malta unit’s secretary C. Bowden was appointed organizing officer for the Mediterranean Command and he announced the conditions of enlistment on 11 February 1915 in the Daily Malta Chronicle. The terms offered to members of the Malta unit who volunteered were (1) pay, separation allowance, act., to be the same as the regular army (2) service wherever ordered but probably Africa as infantry (3) aged 25 to 48 but must first pass a medical examination (4) and members with previous Army and Navy service who had lived abroad were to be given preference, although healthy men of good character who pass shoot straight were also given a chance.

The volunteers were told to report to St George’s House, St Julian’s where C. Bowden. Chief Organizing Officer of the Legion of Frontiersmen Mediterranean Command was in charge of recruitment.

Those Frontiersmen who remained behind came under the command of the Executive Officer C. Bowden and for shooting practice on the rifle range under Sergeant C.W. Simpson.

During 1915, when the Gallipoli campaign in the Dardanelles got underway, Malta became established as a base hospital and by the end of the year there were 27 hospitals and camps providing accommodation for 25,000 casualties.

Among the wounded there were many Frontiersmen. Members of the Malta Unit of Frontiersmen made regular visits to these hospitals to see what further assistance they could give to the injured Frontiersmen while they were recuperating on the island.  At the end of World War One the Malta unit became known as the Legion of Frontiersmen Rifle Club.

Co-writer on junkyard.blog. Author of windowsintohistory.wordpress.com. Editor of frontiersmenhistorian.info
View all posts by Roger Pocock →
This entry was posted in Frontiersmen, Legion of Frontiersmen, Malta and tagged Daily Malta Chronicle, Earl of Lonsdale, World War I. Bookmark the permalink.

2 Responses to The First Frontiersmen in Malta